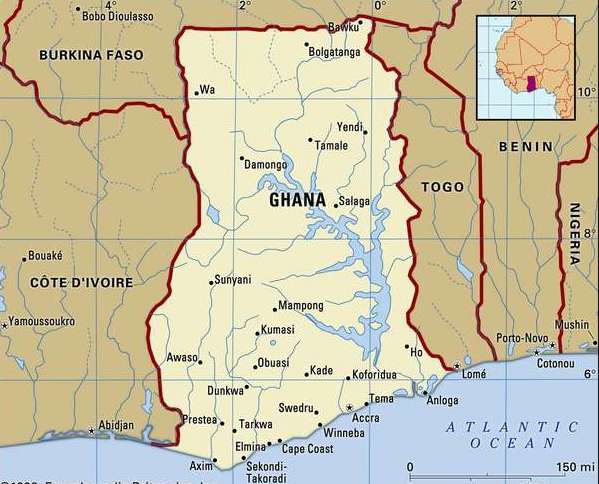 Ghana, country of western Africa, situated on the coast of the Gulf of Guinea. Although relatively small in area and population, Ghana is one of the leading countries of Africa, partly because of its considerable natural wealth and partly because it was the first black African country south of the Sahara to achieve independence from colonial rule. In addition to being known for its lush forests, diverse animal life, and miles of sandy beaches along a picturesque coast, Ghana is also celebrated for its rich history—its habitation possibly dating from 10,000 BCE—and as a fascinating repository of cultural heritage. The country takes it name from the great medieval trading empire that was located northwest of the modern-day state until its demise in the 13th century. Direct sea trade with Europe, established in the 15th century, had much impact on the area’s inhabitants, many of whom actively traded with the Portuguese, Dutch, British, and other Europeans. Forts and castles, many of which still dot the Ghanaian coast today, were constructed by Europeans to protect their trade interests. Although trading was originally centred on the gold that was readily available in the area (and from which the future British colony the Gold Coast would take its name), the focus shifted to the lucrative slave trade in the 17th century. The area later became known for growing cacao, the source of cocoa beans. Introduced there in the late 19th century, cacao continues to provide an important export for Ghana. Read more